Welcome to another episode of Millionaire Secrets! Today we’re joined by the one and only – Les Brown. Now I don’t think I even need to give this guy an introduction, I’m certain most of my audience already knows exactly who the legend that is Les Brown is but for those of you who don’t… Les Brown is up there with the top 5 most outstanding speakers in the world, he has won the National Speakers Association Golden Gavel Award, and he has spoken to crowds as large as 80,000 people all around the world. One of the millions of people that he has spoken to, was me. Back in 2008, I was at a really low point in my life, I didn’t have much to my name and I was desperately looking for some hope somewhere. That was when I found Les Brown. As one of the world’s most renowned motivational speakers, Les Brown has devoted his life to helping people rise from the ashes and helps them to grow, learn, and develop. If you’re looking for any conviction to keep doing what you’re doing, THIS is the episode of Millionaire Secrets for you. I know the impact that Les Brown has had on millions of people, now it’s time for you to experience it for yourself. This won’t be an interview that you’ll forget in a hurry.

Check out the full episode now to see what Les Brown can offer you! 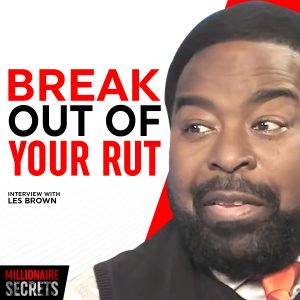