Today’s guest on the Millionaire Secrets podcast is Jason Khalipa. Jason is a CrossFit world champion and owner of the fitness chain of gyms, NC Fit. He’s also the author of the book As Many Reps As Possible – a great selling book on Amazon. On top of these achievements, Jason is also a father, having a baby daughter with his high school sweetheart. Unfortunately, Jason’s daughter developed leukemia – and this has understandably had a big impact on other areas of his life. The NC Fit chain he owns today is a reincarnation of a chain of gyms that he started straight out of college at only 22. With 20 locations across the globe, including corporate wellness centers in Asia, Jason is a busy man. Let’s not forget his training efforts to be an elite-level athlete too! So how has he achieved all of this, using the same 24 hours in a day that we all get? That’s what we dig into in today’s episode. There’s more… So we really dive deep into both the practical mechanics and the psychology of how Jason is able to compartmentalize his day – and his life. Jason was being pulled in 3 directions at one point: world champion training, building a fitness empire & being a good family man. Something had to give. When his daughter was diagnosed with leukemia, he made a shift in his life. World champion CrossFit training had to be the thing that made way. Testing times with his daughter in hospital helped Jason strengthen his resolve and double down on the things that really mattered to him in life. We go on an interesting tangent, talking about preparing for the worst-case scenario. For the gym rats among you, we also discuss some optimal workouts and exercises at the top of the show. A great all-around podcast today and something for everyone!

CLICK THE IMAGE below to enjoy the full interview with Jason Khalipa: 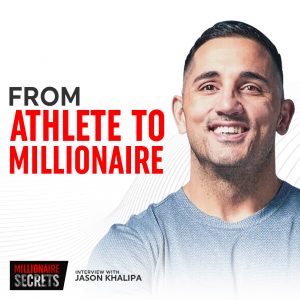