Today I’ve been joined by one fantastic human and a pioneer in the fitness industry – Peter Taunton. Peter Taunton is a true pioneer in the fitness industry – before founding the industry giant, Snap Fitness, he owned nine America’s Fitness Centers, and designed an entire franchise-development operation. For Peter, all of this success started in a small Minnesota town. Peter, who was one of 7, came from humble beginnings. After finishing high school Peter paid his own way through the first three years of college but by junior year he was already feeling frustrated and burdened by all of the debt and he was tired of living paycheck to paycheck. After deciding to quit college with his brother, they began to hone in on their racquetball skills. With a tremendous amount of practice, his level increased dramatically eventually becoming a sponsored player for Ektelon and turning pro. The discipline and dedication learned while playing led them to be ranked as the No. 2 doubles team in the country and later fuel his success in business. In 2010, Peter was named an Ernst and Young “Entrepreneur of the Year”, his companies have been featured for six years running in such prestigious industry lists as Entrepreneur 500, Inc 5000, Top Global, and Franchise 500, and Peter shows no signs of stopping. In 2003, he had a vision for Snap Fitness: to create an affordable, 24-7, results and value-driven gym concept that was different from the usual impersonal, expensive big-box experience. Today there are Snap Fitness franchises open or in development in 2,500 locations in 26 countries! Peter has since acquired or founded several other brands over the years: 9Round, Farrell’s, YogaFit, STEELE Fitness, Fitness On Demand. Together with the Snap Fitness brand, they comprise the world’s largest wellness franchise organization with over 6,000 locations open or in development across multiple brands serving 165 million workouts and counting! Peter says that it comes down to one word: passion. He has it, he teaches it, and the results speak for themselves. Hear all about Peter’s crazy path to success for yourself… 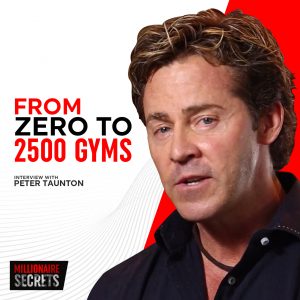