Today we’ve got another incredible story from another incredible person! But this one is a little bit different. A lot of entrepreneurs grow up poor. It’s what makes them so driven to succeed. But for Noah St. John, growing up poor was even more challenging. That’s because he grew up poor in a rich neighborhood! Being so close to wealth and affluence was frustrating because it seemed so unattainable. So he decided to try and change his fortunes. This journey took him far away to Los Angeles but by age 25 he’d tried everything and exhausted every option. Nothing had worked. It was here that he hit the lowest point of his life. He decided to attempt suicide. But something happened. He realized that he must still have a purpose on Earth. He just didn’t know what it was. Since this point, everything has changed. Through faith, willpower, and determination, he found his purpose: Helping others. He’s made the most incredible transformation and has since become one of the most sought-after life coaches in the world. His company, “The Success Clinic”, uses his pioneering methods to bring wealth, prosperity, and wellbeing to anyone who can afford it. His clients include athletes, CEOs, and 8-figure entrepreneurs. In the two decades since he started The Success Clinic, he’s witnessed the information revolution from start to present. The expansion of the internet has been so quick. No one could have predicted it. But despite this, Noah St. John has remained one step ahead, every step of the way. It shows incredible courage and resilience to have founded and then stuck with the same company for over 20 years. But the results speak for themselves! Everyone can learn something from Noah’s spirit and determination.

Check out the full episode now and see what you can learn! 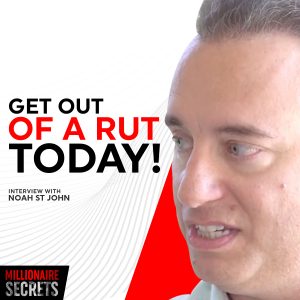