For today’s episode, I had the pleasure of being joined by Rafael Eliassen! Rafael is a coach all the way from Norway and he’s got a hell of a story about how he became successful. Much like most of the talented people we have on this series, Rafael wasn’t born into money, he didn’t have cash handed to him, and he wasn’t always successful. In fact, he was a self-proclaimed ‘obese janitor’. No longer a janitor and certainly no longer obese, Rafael’s story is very inspiring – he is more living-proof that if we can make it, so can you! After some really dark times, suffering from depression and anxiety, Rafael decided to change his lifestyle. He sought out help and got a therapist. Ever since then Rafael has been passionate about personal growth. This passion led him to where is today – coaching others to take the same turn he did! Since 2014, Rafael has been helping people to build their business and the life that they love. He has now built several 7 and 8 figure companies, coached over 600 clients, and his content is valued by over 100,000,000 people! Rafael is the go-to guy to help people all over the world to become their best selves. Could he help you?

Discover How You Can Grow Your Business AND Yourself With Rafael Eliassen! 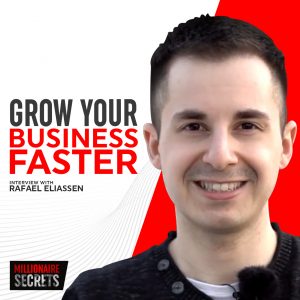